The website is not fully translated yet. New articles are added daily.

(for emergency calls only)

“Nothing is IMPOSSIBLE, the word itself says I'M POSSIBLE!”
Audrey Hepburn

The unbelievable successful story of "HLEKTRA"

You are probably wondering WHAT THIS IS!!!

This is a "harmless" carnival child's toy!

This, on the other hand, is the remaining part of the "harmless" carnival child's toy! 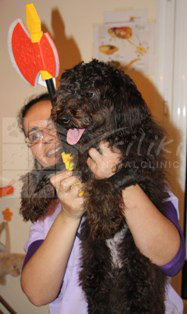 As you have probably guessed the lead actress of this successful story is called "HLEKTRA" and she is a sweet 8 months old Griffon puppy! The story I am going to tell you is probably the most unbelievable and unique story of our clinic!

"HLEKTRA'S" adventure had started with sudden onset of vomiting about 2 weeks before she was presented at our clinic.

"HLEKTRA's" owners had serious suspiscions that their puppy's vomiting episodes were the result of a little "mischief" in their children's toy room. To be more specific, HLEKTRA was caught red-handed chewing ravenously at the little toy with her small but wonder-working teeth!!!

The initial diagnosis of acute gastritis and the treatment that had been administered to HLEKTRA for the symptomatic relief of her vomiting with drugs by mouth and bland diet, unfortunately had no result at all. HLEKTRA's health deteriorated gradually. The vomiting episodes continued and became more frequent. The little puppy was very hungry, but whatever she would eat she would vomit. In the last few days before we saw her, she couldn't even hold down the soups that the owners were feeding her.

The owners devastated and dissapointed by the developing deterioration of their puppy, seeing her suffering from continual vomiting, losing weight and energy levels day by day, decided to seek a second opinion. They were almost sure that something else, more serious was going on with thei little puppy. So, HLEKTRA was presented at our clinic on the 20th of April 2011.

The initial palpation of HLEKTRA's belly, left no space for doubt! HLEKTRA had "something" stuck in her abdomen!!!!

We had no idea and could never imagine what we were about to discover inside this animal's abdomen, despite the very detailed description of the destroyed toy that the onwers had reported.

Xrays were performed immediately to confirm that the cause of HLEKTRA's suffering for so long, was a part of the "harmless" carnival toy, which was obstructing her digestive tract from the thoracic part of the oesophagus to the stomach! 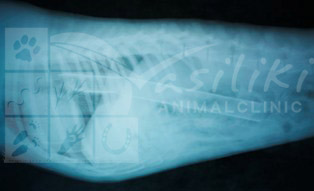 The tragic condition of the animal and the scary view of the xray results, left no space for delaying an emergency operation. HLEKTRA had to be transferred into theatre immediately, otherwise her life was at great risk.

Her owners were informed of the serious risk involved in such a difficult procedure and that the size and shape of the foreign object did not allow removal via endoscopy.

Now, how HLEKTRA managed to swallow this foreign object was and still is a.............mystery!!!The only thing we were sure about, was that there was no way we could remove it via a non invasive surgery, as the retreival from the stomach to the oesophagus would surely cause serious damage. Also, we had to perform a complete inspection of the entire gastointestinal tract to look for other obstructions and remains of the toy.

So, after we had prepared and supported HLEKTA with intravenous fluids, antibiotics and pain relief, we proceeded to the big task of exploratory surgery (we opened up her belly!) and gastrotomy! With very careful and slow technique, we managed to manipulate the toy out of HLEKTRA's stomach/oesophagus and she was lucky enough to have not sustained any serious damages.

HLEKTRA's recovery was unbelievably smooth! She was hospitalized for two days and then she returned home where her owners cared for her and nursed her under strict instruction.

Today, HLEKTRA has recovered her lost body weight, eats perfectly normal and enjoys a "naughty" life! She has managed to steal our hearts with her mischievous personality and sweet little face!

Her story will remain unforgettable to all involved in her case! HLEKTRA taught us a big lesson of strength and the strong will for surviving. Most of all, she reminded us that pets and small children discover the world with their mouths and they can easily end up on the operating table!

Chronic vomiting (over 2-3 days), is always an indication of disturbed gastointestinal function and looking for the true causes of it, is the start of a successful outcome. 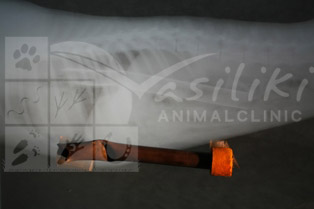